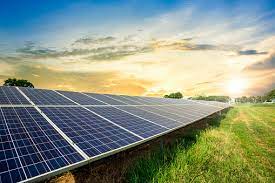 Did you know the science behind working mechanism of solar panels?

So, is it possible that one day the world could be completely reliant on solar energy?

To answer that question, we first need to examine how solar panels convert solar energy to electrical energy. Solar panels are made up of smaller units called solar cells. The most common solar cells are made from silicon, a semiconductor that is second most abundant element on Earth. Crystalline silicon is placed between conductive layers of a solar cell. Four strong connections connect each silicon atom to its neighbors. This holds the electrons in place, preventing current flow.

Light can be thought of as a stream of tiny particles called photons that are ejected from the sun. When one of these photons collides with enough energy in the silicon cells, it can knock an electron out of its connection, forming a hole. The positively charged hole’s location and the negatively charged electron’s position are now free to move about. However, they will only flow one way due to the electric field at the p/n junction. The electron gravitates toward the n-side, while the hole gravitates toward the p-side. Thin metal fingers at the top of the cell gather the mobile electrons.

They flow through an external circuit, where they perform electrical tasks like as powering a light bulb. Before returning to the back through the conductive aluminum sheet, each silicon cell barely produces half a volt of electricity. However, you can connect them in a module to increase their power. A cellphone may be charged with just twelve photovoltaic cells, while a complete house requires numerous modules. In solar cells, electrons are the only moving parts, and they all return to where they came from. Solar cells have a long lifespan.

Why Do Honeybees Die After They Sting?