After reaching the lowest extent ever measured in the satellite record in late February 2022. Sea ice around Antarctica began to rebuild. However, the transition from melting to freezing can be abrupt. In March, a patch of old sea ice near the land glacier in west Antarctica broke away. A new ice formed as a part of the glacier’s ice tongue crumbled at the same moment. 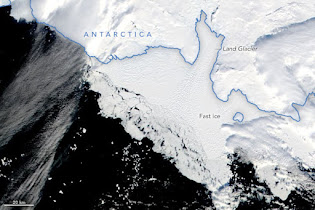 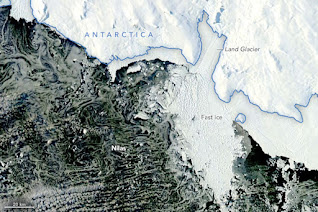 Michael Lowe, an analyst at the United States national ice center. He has been keeping a careful eye on this stretch of the Antarctic coast. This also known as “Marie Byrd Land”.

Lowe stated, “I’ve been keeping a watch on that area for the previous two months. There was a significant section of extremely old fast ice began to break apart. He also observed the tip of the land glacier. It was starting to break off while comparing two SAR photographs from consecutive days.

The changes seen in this set of natural-color photos taken by the moderate resolution imaging spectroradiometer (MODIS) at NASA’s satellites on February and March respectively.

However, recent satellite observations revealed that fast ice around sections of Antarctica, especially off the coast of Marie Byrd Land, has been declining since MODIS records began about 2000. Even still, by the time of the February photograph, a significant portion remained. Much of the previous fast ice had broken away by March.

The creation of fresh sea ice observed in the March photograph, which is another step in the natural lifecycle of sea ice. The smooth streaks and swirls are “nilas,” which are tiny sheets of ice that are usually less than 10 cm thick. (Note that the green-yellow tint is mostly due to low light and automatic color corrections.) New ice contents were driven by winds and ocean circulation patterns or eddies.

Scientists will wait to see what happens to the glacier, icebergs, and sea ice off Marie Byrd Land during the next few seasons. “Over the next few years, we’ll be looking to see if the bergs that broke off the Land Glacier ground. That allow a new region of old fast ice to form, re-stabilizing this area,”

Food
What is MSG, is it actually bad for you?
© 2022 Amrit Gotame | All Rights Reserved. Amrit Gotame.